In line with doubling down on our commitment to decentralization across all areas of the Streamr project, Streamr is excited to launch our Community Fund. It’s hoped that this fund will give you, our supporters, much greater autonomy to shape and create initiatives that will use or promote Streamr’s technology and broaden out those in the community.

There are many great examples of community projects showcasing our tech stack, connecting the project to potential partners, and spreading the Streamr message. Now it is time to give everyone real resources so the community can take a far more active role in helping the project grow.

Share your proposals and get funded on the community forum!

Show me the DATA!

Funds are available in the DATA token and allocated by elected administrators to support project’s aligned with our aims. The total initial endowment of the fund will be 2,000,000 in DATA.

This endowment is expected to last at least one year from the start of the fund (price fluctuations may initiate replenishment of the fund). Streamr is committed to keep the fund going for several years if it proves successful (as deemed by Streamr) in its first year.

For any spending which goes above $1,000 USD equivalent, administrators are asked to consult the community through a public vote. Decentralized tools such as ClearPoll and community voting system or Gitcoin and/or The Bounty Network to allocate the funds are recommended as part of the Web3 1st ethic.

A total of five administrators will manage the fund including one core team member from the Streamr team who will have the right to veto any item of spending and ensure the fund stays within its remit.

For work carried out, community appointed administrators will be paid $250 a month in DATA equivalent (the amount is subject to upward only revision after year one).

This payment will not be taken from the endowment fund and will be separate to it. The election process will be managed by the community administrators themselves but aided by Streamr’s team member.

How to become an administrator?

You can nominate yourself to become a community administrator here. Comment on the thread and introduce why you’d make a good candidate, any ideas for growing the project, and your Telegram handle.

After a week, we’ll add the eight Telegram handles with the most thumbs up on Reddit to a polling bot and share it on the Streamr Telegram for a final week of voting.

At the end of the week, the two candidates with the most votes are chosen as fund administrators for the next six months.

For decision making or task reviewing, the Streamr core team fund member can be available to help but will retain final veto power to ensure brand coherence and responsibility. Official logos and branding elements can be provided to any project supported by the fund but it will be requested that all community initiatives use only official logos and design elements according to our brand guidelines.

The existing Streamr subreddit can be used for fund project suggestions and collaboration. This is supplemented by the Streamr Dev forum for Dev specific tasks.

Projects are proposed on the Streamr Reddit and discussed publicly. Ideas can be sourced from the community and fund managers in a public ideas thread and the main telegram. Reddit thumbs up is used as a general barometer of which projects to focus on. Active projects can then be given their own thread for collaboration and to track progress. Other tools, such as Trello, might be used at the discretion of contributors.

The Community Fund is distinct from any future bounty programmes launched internally by the project.

How the fund is allocated is up to the wider community! However the Streamr team has put together a few possible examples of actions and tasks the fund could undertake:

These are simply suggestions and we encourage admins to invite the community to submit ideas and proposals of their own here – we’re sure there’s many more we haven’t thought of and those are the ones we’re really excited about!

We’d love to hear your thoughts on the fund and can’t wait to see some of the ideas and suggestions you put forward. Propose away!

Thanks as always for your support!

Join the discussion on Telegram!

How do people sell their personal data? With this upcoming feature, it’ll be simple to do. 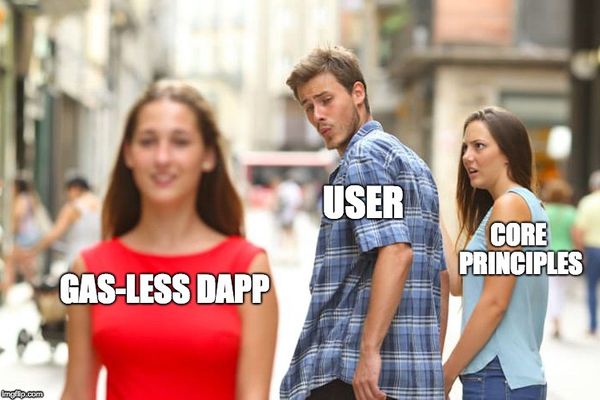 For end users, paying network gas costs are a pain. But is getting rid of them, storing trouble for the future of Web3?