Inspired by the Community Fund, Streamr recently conducted a survey to better understand the community and gain insights into the effectiveness of Streamr messaging.

Below is a summary of the most insightful answers and Streamr’s response (qualitative answers have been summarised by theme and incorporated into the charts).

What first attracted you to the Streamr project?

Many respondents indicated that the Streamr tech stack and goal drew their interest to the project, with a particular emphasis on data monetisation and individual ownership.

This emphasis is not surprising because much of Streamr’s recent messaging has focused on the upcoming Data Unions framework and data monetisation holds the most day-to-day use potential for non-devs.

“The concept of decentralizing and monetising data.”“Giving people back control of their data sounded like a worthy project and the IoT examples sounded like ideal application of blockchain technology.”

The Network, Marketplace, and decentralization of the data economy also came through in the answers.

“It is interesting how Streamr wants to build a decentralized data network based on a blockchain other than Bitcoin. Something scalable that allows connection to IoT devices.”“Decentralized IoT and the idea of a data marketplace where buyers and sellers meet and establish a price for possibly huge amounts of data.”

The popularity of Data Unions, followed closely by the popularity of the Marketplace, reinforce the sentiment that emerged in answers to question two; the Streamr community is captured by the idea of selling their data.

The Network falls slightly behind, despite being arguably the central element of the project. This might be expected due to its highly technical nature and the recent focus on Data Unions.

On which channels do you engage with Streamr content or the community?

No surprises that Telegram, Twitter, and Reddit continue to drive the community engagement. This may highlight that respondents here are primarily of a non-technical background, with only a handful visiting the Community Dev Forum.

What do you currently like most about the project?

The results here were harder to pin down to distinct themes, with Swash taking a narrow lead, followed by Streamr team (thanks!), and enthusiasm for the project’s tech goal of making real-time data more open and tradeable.

“Swash… All the potential DApps that can be built on Streamr… And taking back control of our data.”

The potential of the Streamr stack to act as a platform for others to build on, a platform for existing projects to integrate with, and a tool for a more fluid data economy also came across.

“Swash! Because it is very pragmatic and actually produces the data in decentralized environment. […] At the moment, the most difficult part [in a] data economy is ‘having meta data’ because no one shares. Swash and similar DApps produce this for Streamr.”“The idea of revolutionising the data economy… And the good community.”

What do you dislike or what would you like to see the project do differently?

It’s clear from these results, and other discussion in the community, that three key areas of uncertainty come forward:

“It’s a bit disheartening to see that token economics is talked about probably once or twice a year (when prompted by community members pushing for updates on it).”“Staking the token as part of the network. Its the only reason a lot of people were interested originally. Please don’t push it back further. Streamr should also be prepared to talk about the token — it feels like Streamr always has to be forced to mention it.”
“Tokeneconomics. Now you know who I am. 😁”

It’s true that despite various discussions in the community, direct comms on how the token’s utility has progressed since the whitepaper is lacking. This is largely because the token’s function is still developing, and won’t take full form until the later stages of the Network are rolled out.

The token is currently used as a means of payment on the Marketplace and for individuals to receive DATA by contributing to Data Unions. Still to come are functionalities around token stake checking and incentive mechanisms enabling node rewards.

Proposed solution: A blog from Henri and the team on some of these plans as they take shape could address some of the uncertainty. Keep an eye out for an announcement on tokenomics in the coming weeks.

“A little bit more of a plan to understand future partnerships and developments. Something that should be easy to understand for the Average Joe. I think it will reach more potential investors.”“More internal development communication should be public for Streamr to be a decentralized project, otherwise it’s a company and its followers.”
“Improve transparency. I fully understand that ICO investors are not shareholders, but it’s often very hard to get a sense of what you’re working on and with who, and why. Things get announced, but little is known about your mission or business goals.”
“Proper financial, personnel and visions report. Quarterly please. This is something that brings certainty to the project, as the community will know how things are going in the grand scheme.”

Giving granular updates on the project’s direction (beyond tech updates) or the status of partnerships, while desirable for the community, is not always possible or profitable for the project. This is due to NDAs, coordination between multiple external parties, shifting priorities, value considerations on timing and announcement strategies — plus many more case-by-case factors.

Proposed solution: Streamr will produce a yearly report outlining the achievements, challenges, goals ahead with a breakdown and comments from each project team, and a high level overview on finances. This would also add value for potential partners and less active followers to get an official insight into the project’s status.

“Lack of awareness of the project. Recent community products [Data Unions] marketing is good, but it was about 1 to 1.5 years of nothing prior to that.”“There could be more articles just applying Streamr Core to interesting things, interacting with smart contracts etc. I feel we get one integration every 1.5/2 months, but sometimes simpler is better.”
“Communicate the vision and the market you’re addressing in a more boastful way.”
“More applications for making data something tangible that you show like a footprint to exemplify to no-coiners how much value the average person generates.”

Desire comes through for increased communication from the project, focused on how to apply the Streamr tech and attract a broader audience. The comms team face a continual (and interesting) challenge to strike the right balance between updating followers, attracting devs to build and use Streamr tools, communicating the project’s goals, and generating user awareness for products still in production.

Proposed solution: A comms shift towards adoption and attracting Data Union users outside the current technical and web3 sphere is on the horizon, which will address some of these suggestions.

Further examples of Core in action, perhaps with more accessible canvas templates as starting points, is another possibility in the future.

How would you describe Streamr to a stranger?

It’s great to see so many of you on-message, which is encouraging from a marketing perspective, and it’s also great to understand which elements of the project you put forward independently. As we have also seen in earlier responses, there is a preference for the upcoming Data Unions feature, which was actually added to the Marketplace design after the Streamr project was founded.

Here are a few of our favourite responses:

“An open and permissionless network for the data economy, connecting producers to buyers, not owned by a centralized authority.”“A real-time P2P data network where each participant can control and manage data they produce. Data integrity, authenticity and security is ensured by the blockchain.”
“Real-time data layer/network and marketplace.”
“A platform where you can sell and buy data in real time.”
“A toolkit for constructing decentralized data streams which buyers and sellers trade in a marketplace.”

8. Where are you located?

The most active community members are based in Europe. Other social media analytics show a more balanced follower distribution.

What’s your professional background, and do you have a skill or area of expertise you would like to volunteer to support the project?

Developers take the lead by profession, which is understandable because many of the current tools and comms are aimed at those from a technical background. It was nice to see such a broad spectrum of career paths represented, drawn by the goal of a more open real-time data economy.

Thank you to those who offered to contribute their skills. We will be in touch should we require any assistance.

And thank you to all who took the time to complete the survey. Your feedback and support go a long way towards helping Streamr reach its goals.

If you’re not already a part of Streamr’s most popular social channel, what are you waiting for? Please join the community on Telegram to discuss the results, and keep an eye out across all of Streamr’s social media for updates on the proposed solutions and more. 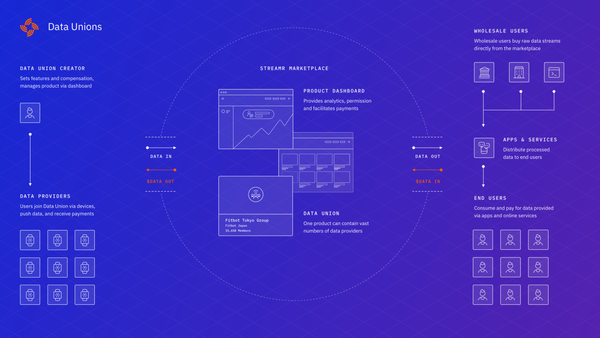 Welcome to Streamr’s core dev team update for February 2020. This month, the team made a lot of progress on the Network and Data Unions…