Last week, Streamr was in Mexico, co-organising and hosting our very first hackathon! It was truly amazing to see scores of students all interacting with Streamr technology and getting excited by our decentralizing mission. I thought I’d write up my thoughts in this blog to keep Streamr users and enthusiasts informed. Before I begin, I have to give a really big thank you to our community member David Resendiz. It was David who first proposed that we come to Mexico City. He then started actively planning for our arrival and connecting the team with key people and leading institutions out there, which allowed us to play a really big role in a series of amazing events - a full day workshop at prestigious ITAM University and a three day hackathon with over 200 attendees. He also set up an interview with Fortune journalist. That’s why this month we made David our community hero and awarded him with a special community hero trophy!

Why did we go to Mexico?

There were a few reasons we decided to organize multiple back-to-back events in Mexico City. We definitely wanted to strengthen our presence in the Americas by building stronger awareness of the project. But we also wanted the chance to catch up with existing community members there. Mexico is also a great gateway to other Spanish speaking countries in the region. Interestingly, many of the early crypto adopters learned about the space from Latin America countries because while in most developed countries people considered blockchain/crypto as a novel technology with potential, in Latin America it has been viewed as a necessary means to obtaining social and economic justice. Finally Streamr is planning to launch a community developers outreach program to attract adoption and stimulate new use-cases so a big hackathon seemed to be a nice starting point to kick-off the pilot.

Here’s a brief overview of the various events we organized or participated in Mexico.

ITAM is a very small university in comparison to its Mexican counterparts. For example, it houses only around 6,000 students compared to 300,000 of UNAM university there. But despite its size it is very influential within Mexican political and economic circles. Its roster of alumni span ex-Presidents, Secretary of Finance and other renowned economists. In addition, its research collaborations include Stanford, Yale, Berkeley, the University of Chicago and Harvard.

Alongside other decentralised projects like our friends from Status, we held a full day workshop. Ours was dedicated to showcasing the Ethereum blockchain, smart contracts, and Streamr’s technological capabilities, including an IoT sensor integration demo and were really delighted to have a packed room. Attendees included computer science undergrad/masters, business students, startup founders and the Dean of the School of Engineering. Streamr’s lead Ethereum developer Juuso Takalainen guided the workshop and kept everyone highly engaged.

The hackathon was organized by MxHack and UNAM university, and was a much bigger affair. In fact this turned out to be one of the largest hackathons organized in Mexico. There were over 1000 applications from participants and organizers selected 400 of them. There was such a large turn-out that they had to close the registration early as the space reached full capacity. It involved three days of non-stop, old style hacking, with many people staying there overnight in sleeping bags and indoor tents. I was really blown away by the level of passion and commitment.

Streamr was one of the main blockchain projects there, and Juuso and I helped set up the challenges and mentored the students.

We launched two main challenges, one focused on Streamr integrations and the other focused on the usage of the Ethereum blockchain, as our complimentary goal was to also grow Ethereum ecosystem. One disclaimer: this hackathon was primarily organized for university students, so we set our expectations accordingly. We were more interested in seeing novel use-cases of Streamr rather than advancing coding solutions. Also we held an additional workshop during the hackathon to spread more awareness about the Ethereum blockchain and its smart contracting capabilities. We also taught attendees how they could deploy their own tokens. Of course as part of this I created my own WeiTokens. (My ICO is on its way).

Outlined below are some of the interesting projects we had chance to mentor and follow during the event.

Mass robberies of bus passengers are actually a very common event in Mexico. Armed robbers board a bus and go on to steal as many phones and items of jewellery as they can before escaping. The hacking team presented a theoretical solution that would combine public bus location data with each rider’s phone’s GPS as a cluster analysis in realtime. An algorithm would detect any anomaly like large subset of that cluster suddenly departing from the bus route and all heading in same direction at the same speed. This detected anomaly would then trigger a police alert with GPS coordinates of that subset sent in realtime. Streamr would be used as the underlying network to gather data from individual phones and buses.

The team primarily comprised of automation engineering students, who planned to create a fully automated solution to grow and manage plants. As a statement to the uniqueness of people we met there, this team had brought along a living carnivorous plant with them to be used as demonstration, (sure, I carry one of those around with me all the time). It was a perfect scenario to utilise a Ruuvi Tag and the long published JavaScript library. With this integration, they could monitor in realtime both temperature and humidity of the desired plot of land targeted. Once data from the sensor was pushed to a stream, they leveraged the Streamr Visual Editor to create event triggers based on specified criteria. For example, they could send a command to activate the water pump if the temperature reached above a certain threshold. Hypothetically, they could use a similar setup to monitor and automate an entire indoor or vertical farm, which are getting very popular in large metropolitan cities where it is not always easy to find affordable organic food.

This team had a nice setup with DragonBoard hardware connected to sensors to mimic shoe pressure sensors. Their solution was to record various parameters from the tennis shoes and transmit that data to a stream on the Marketplace, showcasing an IoT integration solution. Use cases could range from wellness insights to granular performance analysis for athletes. Imagine an app in future that would tailor training based on individual running style, pressure points and health related data?

This project deployed its own token on the Ethereum mainnet. Their main intention was to use the token to create an intra-university coin system to pay for anything like cafeteria food, books, tutoring lessons and more. Long gone are the days when you needed to top-up your university ID card for things like photocopying. Following the path of many ICO projects, they even created a neat website to promote it. It is hard not to give them credit for checking all the boxes.

And the winners Are…

There were a few other projects we didn’t mention here as there were around 40+ teams in total at the hackathon. But out of all the potential competitors, the two winning teams we selected for both the Streamr and Ethereum challenges were 2Steps and Uniken respectively.

Both projects really stood out, and for their creativity and hard work each team got to take home a goody bag of a Ledger Nano hardware wallet, a Raspberry Pi, Ruuvi Tags, limited edition T-shirts and 1000 in $DATA per team member.

It was a great experience being in Mexico City. Events are important, because if you do them well, you get to meet people in person in a way that affects them and you in a really lasting way. We got to interact with many great teams, connect with local institutions and key members of the blockchain community. We’ll not forget our time there and hopefully it won’t be too long before we return again.

Special thanks also to Streamr’s Julieta Arenas Morán for making everything flow so smoothly as always. 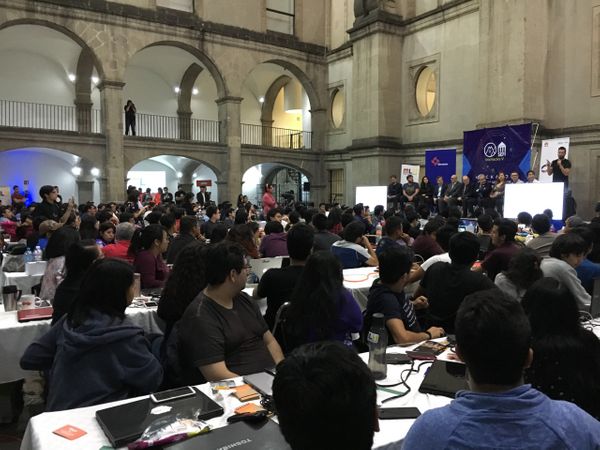 Welcome to our Dev Update covering August and most of September. The first thing you might notice is that I’m not Aapeli! As Streamr’s new…